Zoom networking at 7:30 AM - link provided in registration confirmation

Start your morning with a cup of coffee and join in from 7:30AM - 8:00AM as we network and connect with colleagues in the business community.

At 8:00AM, Mayor Jim Watson will give his update from City Hall and then tune in for a lively conversation with General Wayne Eyre, Chief of Defence Staff.

As CFO for TELUS International, I’m thrilled to be part of such a growing and dynamic company on the leading edge of customer experience and digital innovation.

Joining TELUS International in 2020, I was attracted to the company’s commitment to putting customers first while investing in the global communities where we live, work and serve. TELUS International’s caring culture is truly inspirational.

Prior to TELUS International, I held progressive roles over a 16-year period at Mitel, eventually becoming CFO where I was responsible for Mitel’s global finance operations, including accounting, treasury, taxation, planning and analysis, and reporting. Before that, I was with PwC’s assurance and business advisory practice.

I look forward to continuing to support TELUS International’s strong financial foundation and driving profitability that will always put our team members, customers and communities first.

Locatio
Ottawa—VanieAs CFO for TELUS International, I’m thrilled to be part of such a growing and dynamic company on the leading edge of customer experience and digital innovation.

Gen Eyre grew up on a farm near Wadena, Saskatchewan, and spent his high school years in Medicine Hat, Alberta. 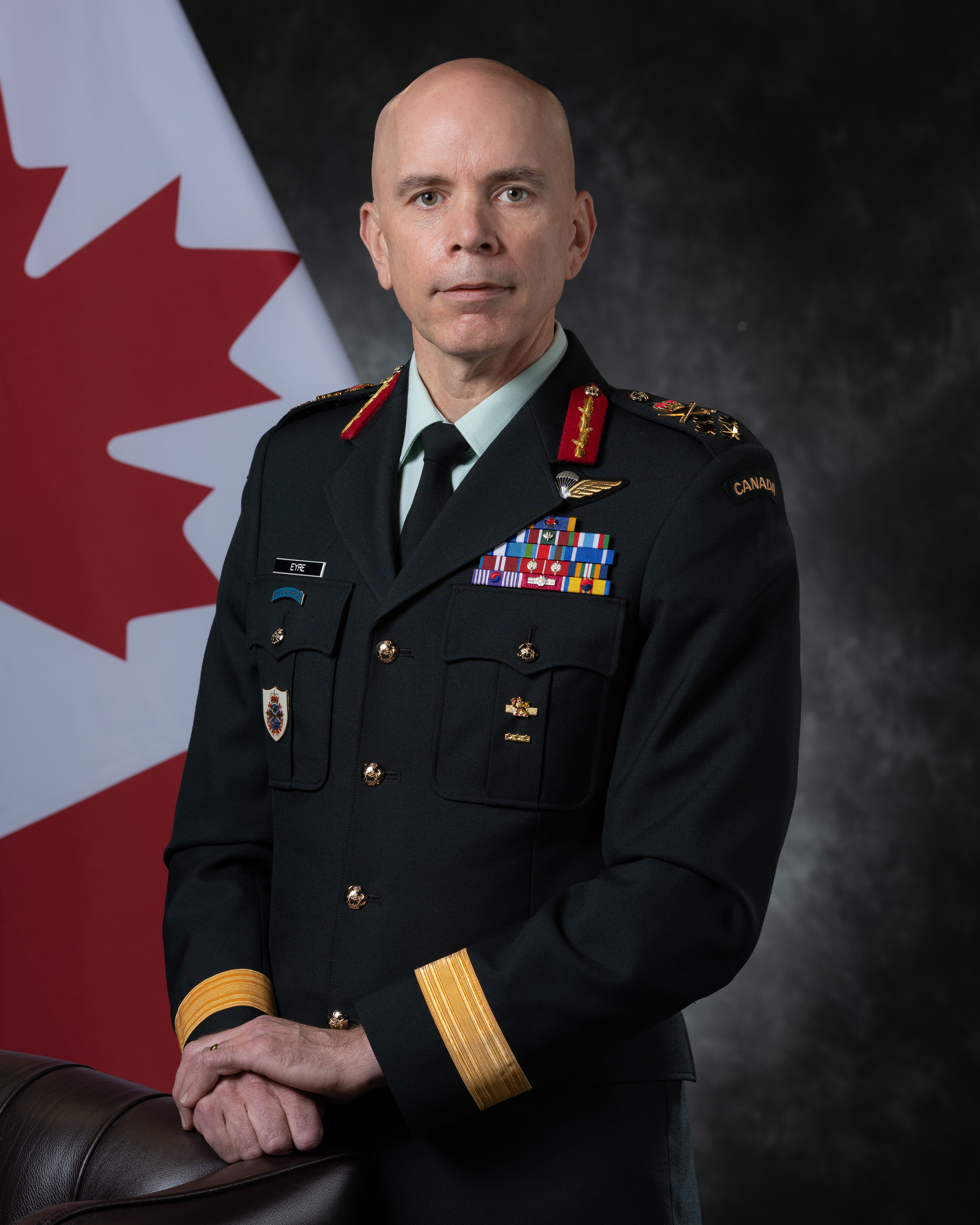 He joined Army Cadets at age 12 and has been in uniform ever since. Gen Eyre attended Royal Roads Military College (RRMC) Victoria and Royal Military College of Canada (RMC) Kingston. Upon commissioning in 1988 he joined Second Battalion, Princess Patricia’s Canadian Light Infantry, and has had the great privilege of spending the majority of his career in command or deputy command positions, including commanding 3rd Battalion PPCLI, 2 Canadian Mechanized Brigade Group, 3rd Canadian Division and Joint Task Force West, Deputy Commanding General – Operations for XVIII (US) Airborne Corps, Deputy Commander Military Personnel Command, Deputy Commander United Nations Command in Korea, and for a short time Commander of Military Personnel Command. He became Commander Canadian Army on 20 August 2019 and was appointed as Acting Chief of the Defence Staff on 24 February 2021. General Eyre was appointed Chief of the Defence Staff on 25 November 2021.

Operationally, Gen Eyre has commanded a rifle platoon with the United Nations Force in Cyprus; 2PPCLI’s Reconnaissance Platoon with the UN Protection Force in Croatia (including the Medak Pocket); a rifle company in Bosnia with NATO’s Stabilization Force; the Canadian Operational Mentor and Liaison Team in Kandahar, Afghanistan advising 1-205 Afghan National Army Brigade in combat; as the Commanding General of NATO Training Mission – Afghanistan, where he oversaw the force generation, institutional training, and professional development of the Afghan National Security Forces; and as the first non-U.S. Deputy Commander of United Nations Command Korea in its 69 year history, and as such is the most senior Canadian officer ever permanently stationed in the Asia Pacific region. Among various domestic operations, he was the military liaison to the Government of Manitoba for the 1997 floods, commanded a company fighting the 1998 BC forest fires, commanded the Task Force that secured the 2010 G8 Summit, and commanded the military response to both the 2015 Saskatchewan wildfires and the 2016 Fort McMurray evacuation.

As a staff officer, Gen Eyre has served with the Royal Winnipeg Rifles, Land Force Western Area Headquarters, in the Directorate of Defence Analysis at NDHQ, and as the J3 of Canadian Expeditionary Force Command. He is a graduate of the U.S. Army Special Forces Qualification Course, the U.S. Marine Corps Command and Staff College, the U.S. Marine Corps School of Advanced Warfighting, and the U.S. Army War College. He holds a Bachelor of Science and three Masters Degrees (Military Studies, Operational Studies and Strategic Studies). His decorations include the Order of Military Merit in the rank of Commander, the Meritorious Service Cross, the Commander-in-Chief Unit Commendation, the Chief of Defence Staff Commendation, the Order of National Security Merit from South Korea and was three times awarded the U.S. Legion of Merit, including at the rank of Commander.